My name is Mladen Bošnjak, I’m an indie game developer and multimedia grad student. This is the story of how my fellow developer Ron “Maxwolf” McDowell stole my Steam game SickBrick from me and is now earning money from it even though I made the majority of the game.

I conceived of SickBrick in 2008 while playing around with the NeoAxis engine. Here is the first video of SickBrick I posted (June 2009):

And here is the release trailer, also posted by me:

At the start of 2011 I presented a few screenshots of the game on the NeoAxis forums.

Another developer working in NeoAxis that goes by the name of „Maxwolf“ (real name Ron McDowell) took notice of it and asked me to help him with his game Incognito. Note that Maxwolf is a mod on those forums and will probably delete my topics there. He said he had already sold more than 1000 copies and would pay me from further sales. I made all the RTS buildings, tanks, some enemies, terrain textures and so on. Maxwolf never paid me anything.

Since I never got paid I asked Maxwolf to help me finish my game SickBrick. I had most of the game done: all the levels, weapons, enemies, text, music… Maxwolf worked on the enemy navigation system, got the HUD, the boss fights and some other things working. He also had a licensed version of the NeoAxis engine which helped offset the cost for me, I didn’t have to buy one. Later on I got a license for the engine myself. We released the game on Desura with his then company Magrathean Technologies taking 10% off of all sales. Here’s the signed agreement between me and his company: 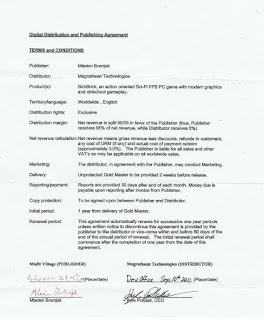 It’s signed by his friend Kyle Polulak who goes by the name of „Fox Diller“ online.

We put SickBrick on Steam Greenlight and got greenlit at the start of 2015.

I asked him to work with me to get SickBrick up and running on Steam. He agreed but asked for 50% of the profits. I first tried to to negotiate a better deal for myself (something like at least 60–40 in my favor since I did most of the work on the game) but then I relented and agreed to Maxwolf’s terms as I considered him a friend and decided to share any profits equally despite me being the one doing a larger amount of work on the game.

We polished up the game and got it ready for publishing. I worked on the storefront graphics, more animations for the enemies and weapons and other visual things. Maxwolf worked on Steamworks integration, porting to a newer version of NeoAxis engine and other programming tasks.

We published SickBrick on Steam in February 2015. Maxwolf is located in Canada and I live in Croatia so we agreed on him signing the contract with Valve since it is a thousand times simpler for him to set up taxes and legal stuff for Steam publishing. He sent me the first paycheck. Scan of payment here (I censored both our addresses from the document for privacy reasons): 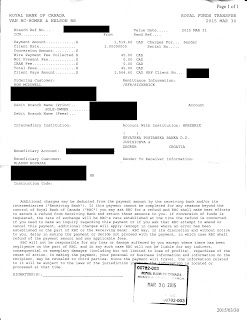 1100 USD may not seem like a lot of money depending on where you live, but for me being a student in Croatia this is a year’s worth of rent, food and college expenses. Releasing SickBrick enabled me to achieve complete financial independence.

Soon after that Incognito got published on Steam and I still saw no money from it, even though my assets are all over the game.

After SickBrick’s sales started dwindling we agreed Maxwolf would send me the money after we reached a profit of 1000$ (so I would get 500$ in one transaction after a time instead of every once in a while in smaller increments).

Some time after that Maxwolf published his game Space Trucker on Steam with many of my assets in it. I never agreed to that but I let it slide.

In November of 2016 I noticed I can’t access my Steamworks account (the place where you generate keys for your game, see revenue, set up sales, set pricing, change storefront graphics, game versions…) so I asked Maxwolf what was up with that and he said he removed me from Steamworks because „I wasn’t working with NeoAxis stuff anymore” — even though I asked him several times before to do the programming on the additional SickBrick levels I had made. At this point I got genuinely mad at Maxwolf. This was also the time when we reached 1000$+ in SickBrick sales and he was supposed to send me my cut. Here is a screenshot of the last of my emails he replied to: 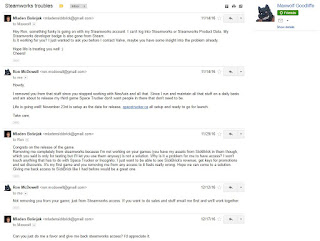 After that, no reply to my pleas: 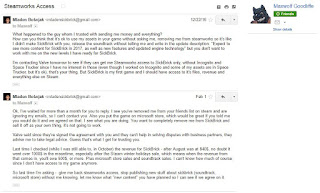 The last straw was when Maxwolf released the Soundtrack for SickBrick as DLC for the game without me knowing. Five of the songs on the soundtrack were composed, performed and recorded in my room using electric guitar and programmed drums by me and a friend of mine from Croatia. From here on I had sleepless nights just thinking about how somebody could do something like what Maxwolf had done to me.

After releasing the soundtrack Maxwolf released SickBrick on the Microsoft Store, again without even notifying me, let alone asking for my permission.

It’s been more than 5 months since Maxwolf removed me from Steamworks and unfriended me on Steam. He also neglected to reply to my emails or any other form of contact.

SickBrick has in the meantime surpassed a lot more in sales than 1000$. I can’t know how much, of course, since I couldn’t gain access to any sales figures on Steam, DLC or the Microsoft Store for the past 6 months, thanks to Maxwolf.

I asked Valve for help with this problem. You can read their reply here: 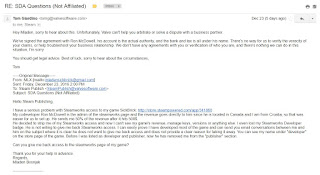 Maxwolf says on his own LinkedIn, in multiple places that I made the game.

Here is a backup file in case he deletes that info.

I hope the fact I’m credited as the creator of SickBrick in the game’s credits and all other places and the fact I control of all of the websites and profiles for the game except the Steam page helps to prove to Valve that I thought of, created and developed the majority of SickBrick.

I intended this open letter as a public message to Ron „Maxwolf“ McDowell, demanding back access to SickBrick’s Steamworks account. He must remove my content from his games Incognito and Space Trucker, or start giving me a part of the profit for those games. I want my access to SickBrick back and my cut of the revenue for it from Steam, Microsoft Store, DLC and Steam Trading Cards. It’s my first game and it’s killing me seeing it taken away from me.If he does not meet these demands, the next step I will take is to report SickBrick and Maxwolf’s games to Valve and Microsoft and take them down from the stores. That seems like the worst outcome possible for all of us, but I can’t bear seeing my game being sold as someone else’s work and them getting all of the money for it.

If you can help me in any way send me an email at: mladensickbrick@gmail.com

I will link to this story on SickBrick’s website, IndieDB page, Steam Greenlight page, Reddit, Facebook page, my LinkedIn, NeoAxis forum and will request another Steamworks help ticket with all this included in it.

You can find the full timeline of this story here with more proof of me being the principal developer of SickBrick and more details about all that happened between Maxwolf and me in the years since we met on the forums of NeoAxis.