Hi, I’m Mladen Bošnjak. As you may remember from the first part of my story, my fellow developer Maxwolf removed my Steamworks access so I could not see the revenue for my game SickBrick or have any control over the game’s Steam Store page. After that Maxwolf stopped paying my part of the revenue and ignored my emails. Seeing no positive way out of this situation I posted a story about it on Medium which gained a lot of traction on Reddit and other places. Youtuber SidAlpha made a great video of the whole debacle:

Here is the second part of the story detailing what happened after I posted the first part:

Shortly after posting my story, Maxwolf and Fox ported SickBrick to Unity and are packaging it as a “Director’s Cut” 2.0 version. Note how hypocritical that is since Maxwolf said he removed my Steamworks access because I’m not working on Neoaxis stuff anymore and now he himself moved to Unity. They are still using my assets for all the levels, the weapons  and HUD. Also, the game is still called SickBrick. They have removed any mention of me making SickBrick on the Steam Store Page and upped the price for the game from 5$ to 19$. In the credits of this “new” SickBrick it says “inspired by Mladen Bošnjak” even though most of the stuff in the game is still mine. It’s worth noting that SickBrick is now a broken mess of a game in which you can clip through the ceiling in the first scene by simply pressing the jump button.  The tank driving levels are removed and most of my enemy models are replaced by just one robot model. The achievements have also been reset for all players of the game. I’m embarrassed at what they have done to my game.

Medium has removed my story from their site, saying I’m harassing Maxwolf as seen here: 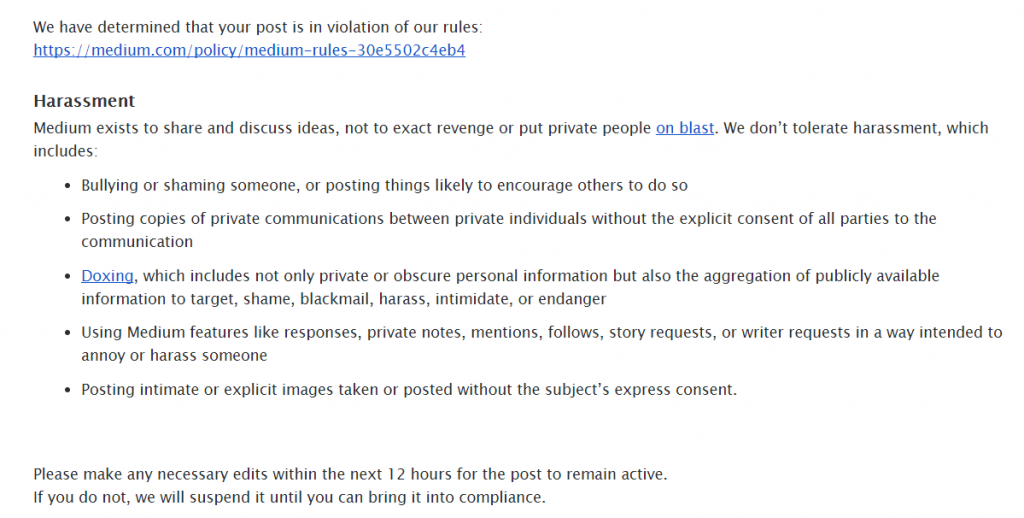 I understand the “posting copies of private communications” part, but I think the other points are not valid.

That’s why I’m posting this second part on my indie studio’s website, since Medium is obviously not the right place to post this kind of story. I have also moved the first part of my story to this website.

Many people told me to get legal advice, which I did. I found out a lawsuit is not a viable option because of my financial situation and the fact I live in Croatia, Maxwolf is from Canada and Valve is based in the US which would further complicate the whole thing. It would require a great amount of time, energy and money to pursue a lawsuit against Maxwolf and I would rather spend those on my next project. The only option was to file a Copyright Infringement Complaint through Valve’s and Microsoft’s dedicated DMCA forms.

I have issued a copyright infringement claim to Valve and Microsoft with all the proof you have seen in the last story and 1GB of raw assets for SickBrick Maxwolf has no way of having. Additionally I clearly marked my assets in the screenshots of the new version of SickBrick, as seen here:

Valve removed SickBrick from Steam based on my DMCA claim, but Maxwolf sent a counter claim in which his only argument is that I did not copyright the assets. That is not true since assets like 3d models and 2d art are automatically copyright to the creator in all the countries in question (USA, Canada, Croatia). He is basically admitting to not paying me and stealing the assets. Despite this Valve reinstated the game back on Steam in 10 business days based on Maxwolf’s counter claim.
After explaining this to Valve’s representative, they said “I’m reviewing this statement now, and will respond to you shortly.“
After this they did not respond at all or respond to any further mails I sent. This was a month ago.

Microsoft on the other hand replied to my DMCA claim like so: „Your notice was submitted to Microsoft. We will review expeditiously.“
They did nothing after that. This was more than a month ago. SickBrick is still on the Microsoft Store.

I have run out of options as it seems there is no way to get my game back. I have chosen to focus all my efforts on my next game and will try to let go of the fact somebody is unlawfully making money off of 3 years of my work without paying me or crediting me and getting away with it.

I would like to thank every single person that has sent me an email or comment of encouragement or advice after I posted the first story. I would also like to ensure everyone this whole debacle has not killed my passion for game development. I have been making games since I was nine years old and will continue making them for the rest of my life.

We move around a lot.

what is up, my good man?

You wanna tell us something, just say it. I dare you, I double dare you! The email adress is on the right. It says "mladen@misfitvillage.com". My name is Mladen, I'm the big boss around these parts. That's why the email says "Mladen". It's a slavic name. It means "young dude". Yeah, I know it rhymes with Bin Laden, that's unintentional.

This is the email I was talking about in the section on the left.